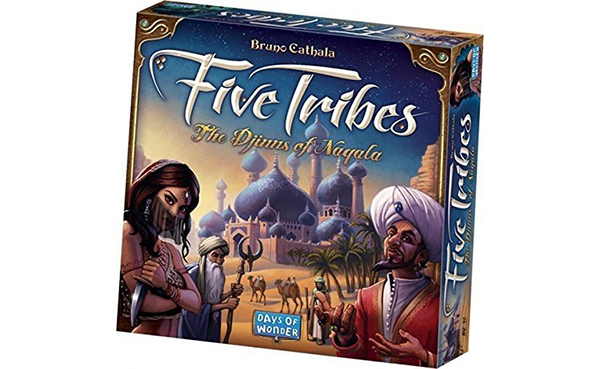 Crossing into the Land of 1001 Nights, your caravan arrives at the fabled Sultanate of Naqala. The old sultan just died and control of Naqala is up for grabs! The oracles foretold of strangers who would maneuver the Five Tribes to gain influence over the legendary city-state. Will you fulfill the prophecy? Invoke the old Djinns, move the Tribes into position at the right time and the Sultanate may become yours! Designed by Bruno Cathala, Five Tribes is a bit more of a “Gamers’ Game” than Days of Wonder’s standard fare. The game builds on a long tradition of German games with wooden Maples in a unique twist on the Worker Placement game genre. While the rules are quite easy to learn and understand, implementing a winning strategy will take a calculated approach. In this worker displacement game, you score by carefully maneuvering the Five Tribes of Maples over the tiles that make up the ancient city-state of the Sultanate of Naqala. You need to look ahead to determine what moves will not only position you to score well, but put your opponents at a disadvantage. It’s when, how and where you dis-place the Five Tribes of Assassins, Elders, Builders, Merchants & Viziers that will determine your victory or failure!