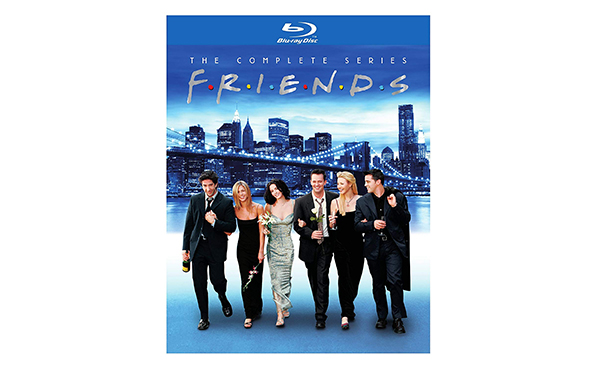 Friends: The Complete Series (Repackaged/Blu-ray): The ultimate collector set features over 110 hours of content (90 hours of features and 20 hours of bonus content). All 236 original broadcast episodes (released for the 1st time in the US) Highly Collectible Premium Packaging Lenticular Box Cover Hard-cover book that holds 21 discs 32-page episode guide with content from the Warner Bros. archives. Over 17 hours of special features from the original DVD releases. Over 3 hours of all-new special features True Friends: Documentaries: Retrospective documentaries with new interviews looking at the influential 10 years of the show The Original Producer’s Cut for ‘The One Where Rachel Tells Ross The Original Script for ‘The One Where Rachel Tells Ross’ Friends On The Tonight Show with Jay Leno (2005) Friends Visit The Ellen DeGeneres Show (2004) The Ones With More Friends: The original extended broadcast episodes The One with the Never-Before-Seen Gags: Never-before-seen gag reel with the laughs that were too funny to include on the DVD The Rembrandts – “I’ll Be There For You”: Official music video.