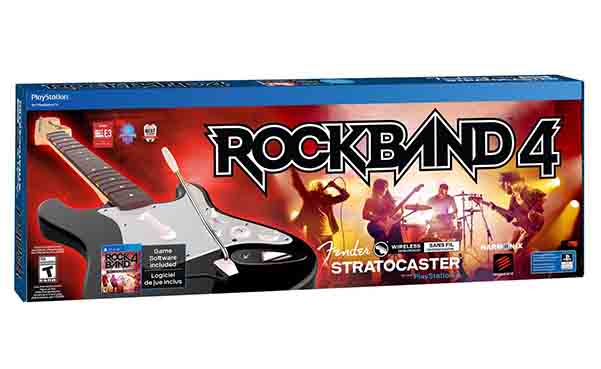 Created by Harmonix Music Systems, Inc., the award-winning developer of innovative music games, Rock Band 4’s next-gen gaming platform boasts the most music available. Offering much more than the 60 tracks featured in the core playlist, over 1,500 additional tunes are available for download from the ever-growing, in-game Music Store. You can also freely import your previously purchased Rock Band music library into RB4.

Get social with multiplayer “Shows” mode — drop in or out, and even change difficulty, all on the fly and without interrupting gameplay in one of the best party games available. Unleash your expressive talents with all-new gameplay elements that enable you to add your personal signature to every performance.

In addition to the full version of the RB4, you get an authentic replica of the guitar that helped shape the sound of modern rock. The Wireless Strat is new and improved for the next generation of rockers. Easily activate Overdrive and automatically sync the Rock Band 4 guitar controller with any TV. An ideal bridge between music game and the thrill of playing a real guitar, this Rock Band 4 bundle empowers you to live out your greatest rock fantasies.

Rock Band 4 features over 60 tracks, including:
Aerosmith – “Toys in the Attic”
Avenged Sevenfold – “Hail to the King”
Elvis Presley – “Suspicious Minds”
Foo Fighters – “The Feast and the Famine”
Imagine Dragons – “I Bet My Life”
The Killers – “Somebody Told Me”
Mark Ronson ft. Bruno Mars – “Uptown Funk”
Mumford & Sons – “The Wolf”
Paramore – “Still Into You”
Van Halen – “Panama”
… and many more!