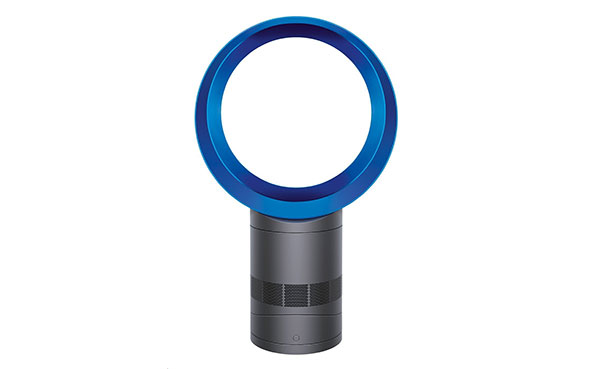 Instead of using blades, Dyson fans use patented Air Multiplier technology for powerful airflow projection. Air is accelerated through an annular aperture, drawing in surrounding air to project a high-velocity cooling airflow. And with no blades, the airflow is smooth – not choppy. Dyson engineers developed AM06 to be quieter and more energy efficient than its predecessor. Streamlined air channels reduce airflow turbulence so that air passes through the machine more quietly and with greater efficiency. It also has an acoustically engineered motor bucket to reduce vibration and therefore noise. The result is that AM06 is 75% quieter than AM01. Energy efficiency has also been improved. With smoother airflow through the machine, the DC motor doesn’t need to work as hard – so less energy is required to channel the air for powerful performance. The addition of a sleep-timer further reduces energy wastage by ensuring the Dyson Cool fan switches off automatically when it’s not needed. AM06 can be programmed to turn off after preset intervals ranging from 15 minutes to 9 hours. AM06 comes with a remote control providing 10 precise airflow settings – as well as one touch oscillation control for smoother oscillation. For extra convenience, the remote is curved and magnetized to store neatly on the machine. With no fast-spinning blades or awkward safety grilles, AM06 is safe and easy to clean. Condition Factory Reconditioned