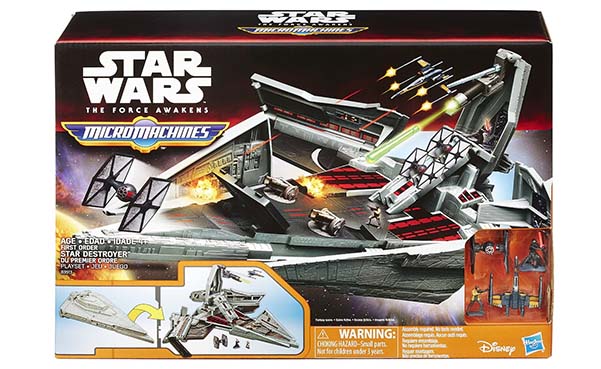 Picture new galactic maneuvers with this Micro Machines First Order Star Destroyer Finalizer Playset. With a single simple motion, this formidable battleship converts to a miniature battlefield complete with awesome action features. With a dagger-shaped silhouette reminiscent of the Imperial battleships of yesteryear, the Finalizer is a First Order Star Destroyer. In addition to the included Poe Dameron’s X-Wing and First Order TIE Fighter (Battle Damage) vehicles, act out the story with Kylo Ren and Finn (Jakku) Microfigures. Collect and battle with these and other favorite vehicles and figures from Star Wars Micro Machines. Each sold separately. Star Wars products are produced by Hasbro under license from Lucasfilm Ltd. Micro Machines and all related terms are trademarks of Hasbro.