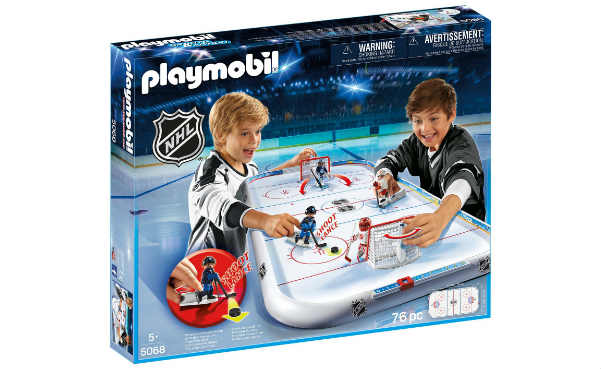 Skate into action with your own hockey match at the NHL Hockey Arena. Each of the four NHL players feature a movable arm and hockey stick for even more realistic game play. Simply pull back the lever to swing the stick and fire the puck down the rink towards the opposing goal. Use the goalie to defend against offensive plays by clipping the player to the goal and then using the joystick to maneuver the goalie from side to side for some game-saving blocks! Thanks to the included team decals, kids can customize each player to represent their favorite NHL team. Set includes four NHL players (two per team), three hockey pucks, game play rules booklet, player number decals, logo decals for all 30 NHL teams, score-keeping slide rule, and other game-tastic accessories.